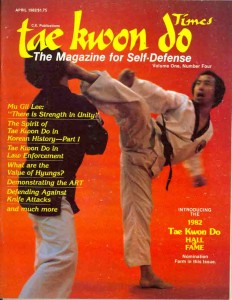 Mu-Gil Lee (pictured to the left) opened the first Korean martial arts school in Bloomington, Indiana in the very early 1970s.  Mu-Gil Lee taught in Germany before John George (a captain in the U.S. Army) brought him to Bloomington, Indiana, in 1972.  At the time, Master Lee was a 7th Dan and one of the highest ranking black belts in Tae Kwon Do in the United States.  He started Tae Kwon Do in the early 1950s, and was “first instructor” with the Korean Navy and Marines from 1958 through 1966.  In 1970, he went to Europe to teach the NATO forces, which is where he met John George.  Mu-Gil Lee was greatly responsible for the spread of Tae Kwon Do in Indiana.  Not only did he open a series of schools, but he also brought a host of other Korean instructors to Indiana.  He first brought over Il-Sik Kim and Kie-Duk Lee, but later brought over Masters Kwak, Ko, and Sa as well.  Kie-Duk Lee was a member of the Ji Do Kwan (“Way of Wisdom Hall”), and introduced the Bul-pai and Roh-pai pumsae from that style and Grandmaster K.D. Lee is the founder of the United States Hapkido Association and the U.S.A. Tae Kwon Do Federation. 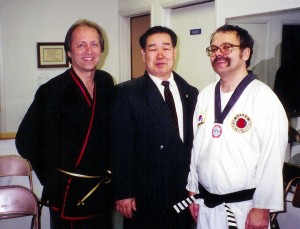 By 1974, M.G. Lee’s senior—Kie-Duk Lee—took over the school on West First Street, naming it Bloomington Martial Arts School.  Kie-Duk Lee moved to Chicago around 1978. Soon, thereafter, the school moved to South Washington Street and changed its name to Lee’s Martial Arts.  In 1987, the school moved to a new location just off the corner of Walnut and Third Streets.  It remained there under the leadership of Grandmaster K.D. Lee and his students until the city bought the property and forced it to move in 2007, now at 3822 W. Third Street.   While at its Walnut Street location the school flourished with a large children’s and family program and with enrollments running between 120-140 students.  Throughout its history the school has had several legal owners (M.G. Lee, K.D. Lee, Eric Richards, Gary Johnson, Sulaiman Zai, Martin McCrory, and Lee Land), but there have been three constants throughout—it has operated under the leadership/guidance of Grandmasters Richards, Lee, and Cecil (pictured to the right).  On February 2011, a cooperative ownership was established between the six new owners, all Lee’s Martial Arts instructors; Bill Brower, Scot Curry, Carl Jarvis, Scott Johnson, Jeff Lewis, and Branden Price.